I was reading an article recently about which artists have been successful at reinvention. The article went on to say that these artists recognized the need to reinvent themselves in the pursuit of obtaining a long lasting career in the music industry. I’m sure you’ll have a few artists which come to mind. This got me thinking about my music.

When I first started recording five years ago I had a back catalog of over 50 songs. Given I’d never been in a studio before, I had to be selective about which songs would go on the first album. Half made it. New to living in the States – and already having a penchant for writing Folk, Americana and songs with Jazz/Blues/Gospel undertones – ‘living in the USA’ underpinned some of the new songs that went onto the album.

I then started to play live (something I’d never done before) while becoming more experienced with home recording and with really preparing song files for use in the studio downtown. Now, I was beginning to write my own arrangements, another new exploration.

I began to realize that I was in some kind of cycle, one that was getting stronger and stronger over time:

Music as a muscle

In fitness terms, it would be akin to seeking to grow your muscles through working out. You stretch yourself further and further so as to increase your muscle mass.  ‘Training makes you stronger”. I guess it’s no different for any endeavor you put your heart into.

I felt I’d begun to discover a new dimension I’d never known before – like  Dr. Who’s Tardis when he talks about Insides and outsides not being in the same dimension :-).

Any ways, I realized that the more you release your creativity, the more it expands and the more you want to explore and write.

I’ve been told before that I don’t fit into any genre of music. I write Americana, for sure, but I write jazzy pieces, gospel undertoned pieces, orchestral pieces and now I’m venturing into pop. I do all this not because I’m trying to find a market for my music and that, therefore, I need to try on different musical hats to see which fits best. I’m doing it simply because I want to be me. It’s not about reinvention, I just want to express myself freely.

Creativity comes from within but it has many influences to acknowledge:

If you’re like me you probably like a lot of different genres of music. Mornings for me are often without voices: classical or ambient music; I like folk and indie folk; I love pop with ethereal shifting undertones; Burt Bacharach 60’s tunes, and soulful 70’s music from the greats like Aretha, Roberta Flack, Dusty Springfield etc. Or I love downright I-can’t-help-but-sing-these-lyrics songs!

So, if we like all these different styles of music, how then can we NOT avoid their influence on our writing? Now, overlay this with the most important influence. Life.

Events within our own personal circles or social/economic/political events at home or abroad can have a real impact, especially if they affect our friends, families or communities.

We change over time, that’s the beauty of life, it’s why everything is still such a discovery, and which is why the journey is as important as the destination. I remember something Nina Simone said in an interview about why she joined the Civil Rights Movement in the 60’s. She said, “How can you be an artist and not reflect the times?”.

I realized that whatever I write, I write in the now, at this moment in time. When I’m an old lady and look back at all the songs I wrote, I’ll know that each one was an expression of who I was at that age, at that moment in time, listening to this music and being affected by that social/political event in whichever country, home or away.

2+2=4 was written during 2016 and 2017 but was influenced as early as January 2016 by domestic and world events. The Other Side was the first manifestation of this moment in time. I felt I needed to write about love and intolerance and about never forgetting how beautiful we are as people and not to lose hope in each other. Stereo Stickman did a beautiful review of the song. The other songs on “2+2” explore this more but from various perspectives.

Musical influences were also very much present, which is why the songs are stripped down in feel so as to support the lyrical content. These songs are bound by the same woven thread running through them: they are bare, organic, honest and lyrically poetic.

For these particular songs, I saw a lot of imagery when I was writing them.

I think this imagery was inspired by listening to a lot of heartland folk at that time, music that had an edginess to it. I’m always trying to find different yet authentic ways to express myself through music. Ways that challenge me and force me to get out of my comfort zone. ‘2+2=4’ is one such project.

Here’s some insight into the meaning of the songs although it would be better to read the lyrics to learn more.

River Running essentially looks at two elements of nature (man and water) and illustrates how similar they are in life’s journey. Personally, this was an amazing creative journey, so much so that I wrote four blogs following the creative process.

+ PART 4: Let Me Tell You About The Three Bears

To mark the launch of the EP, I released the Try Coming Round music video. Shot in the recording studio, some of the footage shows me recording the vocals that went onto the final record, as well as footage of me having a go at playing mallets. I have never sat at a drum kit before and, I have to say,  it was fun!

I have just released my fourth Beyond The Fold vlogletter (video newsletter) in which I talk a little more about the writing of the song.

So there you have it, an introduction to 2+2=4 and a reason why you may find the songs a departure to what you’ve heard me write previously.

A producer once told me “your songs are all your children and you are the mother. They may each have their own personalities but are loved for their differences. You are their Mother and love them all”. 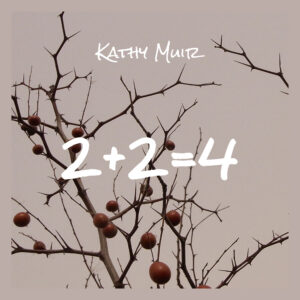 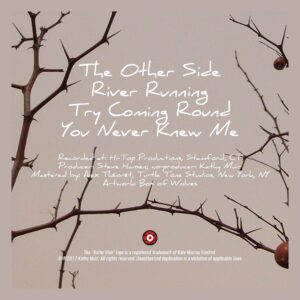