To get down quick recordings of new ideas before the moment has gone, I’ve started using a simple method. I lean my Roland Micro Cube amp against the wall, whack on full delay and set it to ‘JC clean’, stretch the guitar cable to where I’m sitting then put the iPhone on a small tripod, and play.

I then take the file, put it through one of Logic’s own reverbs and bounce it to an mp3. It just helps in those early days when the song is bedding down so as to figure out what needs to change.

Two nights ago was one such occasion. I had been finishing a song I Want To Lay Down just before midnight and, to give myself a break from the song, I went back to an iPhone recording I’d put down a few weeks earlier of a similar session with the Roland amp. The song’s working title was Jesse James (you never know what pops into your head) and I knew I always wanted to finish the song with the line ‘ you never knew me’. I just knew that was where the song had to go. 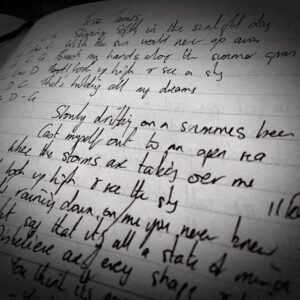 I opened my book to remind myself of the chords, began to play and, as usual, opened my mouth to sing whatever it decided to utter. This time, however, it all made sense. I sang through the first verse in one take, quickly put down my guitar and scribbled the words. I picked up the guitar once more, followed the lyrics and hoped the mood would lead me to the next verse. It did. Again, I wrote down the lyrics before I forgot them. I followed the same process to find the words for the bridge.

I think it was the mood of the evening that made this wee song come alive. There was a peacefulness and a calmness by flickering candlelight, tired eyes and a happy creative heart from having finished I Want To Lay Down earlier.

Anyways, I thought you’d be interested in the creative process :-).

You Never Knew Me

You may say that it’s all a state of mind
Disbelievers are of every shape and kind
You think it’s easy as one, two, three
You know me now, but you never knew me

One thought on “New ‘Rough Diamond’ song – You Never Knew Me”