‘The Other Side’ live at home

Check out a video of The Other Side filmed at home yesterday Jan 30th and which introduces the show at which I’m playing ( Cafe Nine, New Haven on January 31st.)

Speaking of which, the finishing touches for new EP “2+2=4” are happening right now. At least in terms of the songs themselves. These are four songs on the new EP:

Go over to my blog to read more about the making of River Running. For the music video, we were doing a bunch of recordings – both audio and video for the EP. After filming Try Coming Round, I let Vincent (videographer) hear River Running. You see, we’d planned to release the EP with simple, honest music videos during the recording of each song. Once Vincent heard the song, he said “this isn’t a studio video, we need to shoot outdoors and I know just the place. I also have a pretty interesting idea for this video”.

Once the weather gets warmer, we’ll head towards Beacon in New York State. I can’t say much else about the video except that a Roland Micro Cube amp is going to feature. Big time!

I have a few stories to tell behind the making of these songs, so stay tuned! 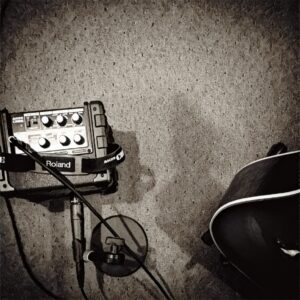