This weekend, I went to the Loft Arts Association with the hope of meeting some emerging artists and viewing their work. Whenever I think of painters, I always end up thinking of a young painter whom I never met but whose memory resurfaces whenever I think of this kind of medium. So much so that I ended up writing about him. Some say photography is fine art, others that its role is solely to document. The photograph below belongs to the latter camp and the story you are about to read is one of 25 short photograph stories I wrote in December 2005. Each story was written about a photograph and was based largely on fact, with some elements of fiction. These have never been published. The style of writing was aimed at two young readers: my ‘nephews’. I would often tell them stories but for this particular Christmas I wanted to give them an Advent calendar with a difference. So, on the first of December and each day until Christmas Day, they were emailed a photograph and its corresponding story. Of all the short stories I wrote, Paris Painter still resonates. When you read the story, you may understand why. Paris Painter – Day 14 Sunday afternoon promenades are a common occurrence in Paris. It’s one of the things Parisians do best: taking a tour around Le Jardin du Luxembourg, Buci Marché or the cobbled side streets of the Quartier Latin. However, the 4th Arrondissement, known as Le Marais, has a real medieval feel to it and is a favourite haunt of mine. In the heart of Le Marais lies the Jewish quarter, a delight for enjoying a weekend-away stroll. But this calm and picturesque quartier has had its share of hard times. Rue des Rosiers still has plaques on the street buildings displaying the Star of David. There are many Stars of David. Too many. Each Star has inscribed some sad tale of residents young and old being taken away by the German SS, never to return. The misery has since disappeared and now clothes boutiques, cafes and delicatessens replace former dwellings. Or so we thought. One day we were ambling along Rue des Francs Bourgeois when we came upon a small alleyway. In the alleyway lay a young man sleeping. Unlike the chic clothes shops opposite, his clothes were frayed and displayed many shades of one colour: the city streets. His fingers, however, were engrained with vivid colours. Hues of deep red and passion purple, sand dust ochre and linen white. 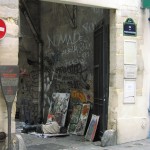 A near-empty bottle of whisky lay by his side, as were scatterings of chalks and crayons, oils and paint brushes. Looking more closely, we saw worn canvasses; they too being seasoned dwellers of the alleyway. Each painting was very similar in design: random and wild, portraying different faces. Further within the alley were crumpled canvasses, framed in old bits of wood nailed together. Each depicted some poor, crucified soul screaming out for salvation or forgiveness. My friend crossed the street, checked he was alright, hesitated, then left a little something near his brushes. We weren’t sure this would help or hinder, but it was something. Six months later, a leading newspaper ran a story about a gallery owner who had discovered a young Paris painter lying in an alleyway in Le Marais district. ‘It must have been the same man’ I thought. The article went on to say that the gallery owner had bought many of the young painter’s canvasses and that they became highly sought after. There were two additional facts in the article: the young artist had lost his memory and was extremely sick and in hospital.  It was such a bittersweet newspaper article. The following Spring, I was travelling in the States when I received a text message from my friend. A mutual friend of ours currently living in Paris had heard some news on the radio that a young Paris painter passed away peacefully in the early hours of the morning after a long illness. It’s a strange feeling, when someone touches your life and they never even know it. And the young painter? He’s never too far from my thoughts.   Kathy   kathymuir.com      facebook.com/theleens      @theleens