The singer and the mic

In 1890, the New York Phonograph Company opened the first proper recording studio. Most recording studios were located on the east coast of the United States.  Studio recordings in those days were made by the mechanical or ‘acoustic’ method which meant musicians were grouped around one or more recording horns as shown in these photographs.

That was until Western Electric pioneered the use of microphones and amplifiers in the mid 1920’s, resulting in the recording industry’s gradually conversion to electrical recordings.

Today there are thousands of recording studios around the country, both professional and home recording studios. Some are incredibly elaborate, others incredibly simple, like mine. Equipment has developed beyond recognition in an industry that is less than 150 years old. Despite these developments, one thing remains unchanged in my mind: the musician performing into a small metallic device, whose signal is recorded in order to then be played back.

I find that thought incredible, that the art of recording an instrument hasn’t fundamentally changed throughout the years. It’s pretty humbling if you think about it.

And I do think about it, just for a moment when I’m standing in front of the mic and Steve says, ‘ok, let’s do a take’. 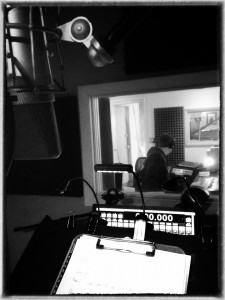