I’m excited to share the video for You Never Knew Me. This video has met the dreams I had in my head when I wrote the song. Admittedly, I also saw myself in a rowboat, drifting across a serene lake before storms set in. However, that’s a lot of imagery to try to show in a video. Nevertheless, looking at this video reminds me how I feel when I sing it.

Organic to the end

You see, everything about You Never Knew Me feels organic. For example, the words are bound by the melody. The sound and shape of the instruments played an integral part to the song’s sonic landscape. And let’s not forget the visual landscape. Even the original recording felt organic becasue I placed a Roland Cube amp at one end of the room and sat with my guitar at the other end. Recording both guitars each with different textures and different distances from the mic created an interesting effect.

Then there was the Fender Jaguar. Steve and I had a whole day of trying to recreate You Never Knew Me as it was recorded in my apartment. We originally tried my guitar plugged into the Roland cube, tweaked the distortion in the amp and the EQ on the channels. However, the sound still seemed too clean. And that’s when Steve had the idea of trying his vintage electric guitar. It was a bit weird putting on a vintage electric guitar. However, after a while, it felt surprisingly nimble. I guess if I ever started to play on an electric guitar, I would love to have a Fender Jaguar.  This 1964 guitar is one of Steve’s (producer) most prized possessions and did not disappoint, as I hope you’ll agree.

For now, I hope you enjoy the video and the song. 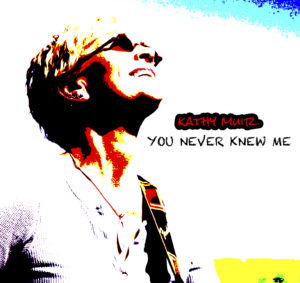 Cover Artwork of new music video ‘You Never Knew Me’