SEATTLE MORNIN’ SONG LAUNCH
You may recall I launched the Seattle Mornin’ song and video in November of this year. However, I wanted an opportunity to talk about the making of the song, the painting and the video. So, I invited members of the public to the Loft Artists’ West Gallery to offer some insights into the making of this two year project. Artist Paul Larson also explained a little about his own creative process to paint A Ghost in Reverie which features in the video. The evening rounded off with the showing of the Seattle Mornin’ music video.

The event was well attended and it seemed only fitting that it take place in the Loft Artists building. After all, this was where the seeds of collaboration first germinated. So, in early January I will be releasing a short video which captures the night’s events, and you can hear for yourself what 100 blogs could never fully capture.

KATHY MUIR PHOTOGRAPHY
You’ll read below about the next album and that we’re pushing back the launch by one month. The reason for this is that, after exhibiting my photography work in October’s Loft Artists Open Studios, I had a very positive response to these 12×12′ high-contrast black and white photographs printed on metal.  I’ve been taking photos for as long as I have been writing songs, and always have my camera at the ready. So, I’m completing a new website for release in early January. The site will include a gallery, a shop, and blog & news pages. I always have something to say about photography, so I hope you’ll take a peek. Finishing the work on the site also means that I can get back to completing the process of making Book Cover Judge.

BOOK COVER JUDGE ALBUM
The album is due to launch in early February. Artwork and mastering is now complete but I need to check over everything one last time, which I will do after the Christmas holidays.

MULTI MEDIA YOU SAY?
In March I will be putting on a 45-minute show at Seaside Tavern. As a first, I want to include multi media: images relating to the songs, some footage of artists who inspired part of my writing, archival footage of the 1920’s California and the Pacific Northwest.

E.P.
This five track recording will include Never Felt Like a Woman, Troubled Town, Simply That and Stop Messin’, all of which I play live currently. The fifth song has a working title Charlie Happylife as it’s upbeat and reminds me of one of our local musicians Charlie Happylife :-). Steve (producer) and I have already recorded Troubled Town and Stop Messin’ (rockabilly) and have completed first takes of NFLAW and Simply That. We’re nearly there, so I’m hopeful for an April release.

CHRISTMAS HOLIDAYS
So, much more to come but, for now, it’s time to stop working and start spending time with family and friends in Scotland. I’ve managed to grab a few days in London on the way up to Edinburgh and, on the way back to the USA, I’ll be spending New Year in Paris where I plan to see at least two art exhibitions, (Hokusai and Picasso), take heaps of photos and will be trying the open mics on Hogmanay and 1st January at the Tennessee Jazz Bar, the Bombadier and the Highlander.

So, have yourself a very Merry Christmas/Happy Holidays! 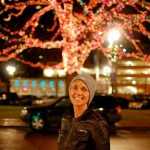