Eyes of a Child

I played at a very special place on the weekend, a place where I used to volunteer most weekends for a few years. 10 years in the making Mill River Park is a dream coming true, a ‘Central Park’ in downtown Stamford.
The Mill River Damn was demolished, allowing herring to spawn for the first time in 360 years and land along the riverside has been reclaimed from invasive plants. It is a park for all seasons and for all people: a playground for the kids, the 4th grade science curriculum at Hart School is now being taught through the laboratory of Mill River and each summer yoga takes place on the Grand Steps as does the Cherry Blossom Festival that celebrates cherry trees donated by Japanese-American immigrant Junzo Nojima, as a thank you to the community who supported him during WWII.
This weekend, Mill River Park had organized a series of Horse & Carriage rides and asked me to play. It was lovely to give back to the Park, this time music instead of muscle.
To keep folks warm, hot chocolate, toasted marshmallows and firepits were provided. Cajon player Vinny and I played throughout the 4-hour event. I hadn’t played out in the cold before but it was just magic.

While singing I found myself looking at the folks with their kids toasting marshmallows, all wrapped up and excited whilst trepidatious at touching the horses. 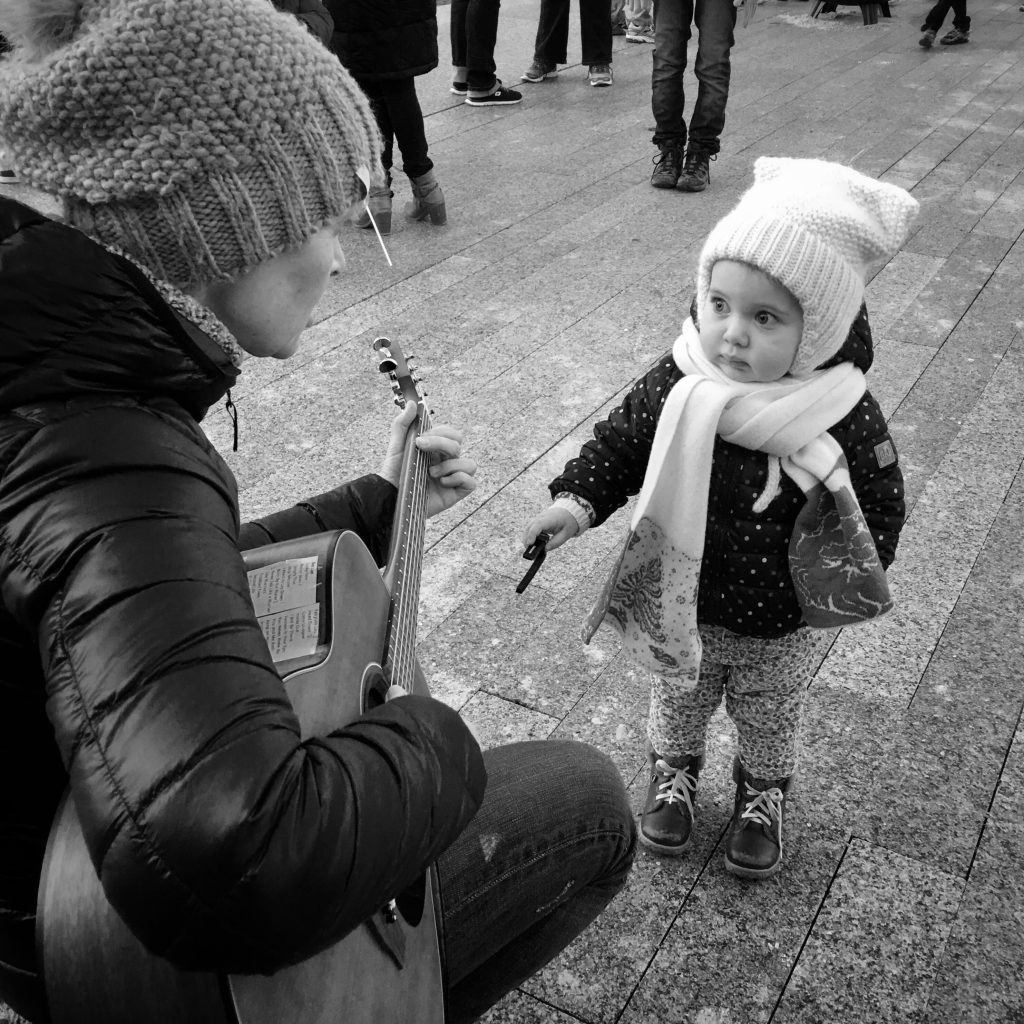 Eyes of a Child at Mill River Park

What gave me most joy was seeing the kids dancing or stomping their feet to the fast songs. After our second set Vinny and I took a break. I noticed a wee girl looking at me, bent down to say hello and asked her if she liked music. Her Mum said they sing her a lullaby every night. I told the little girl that I have a lullaby I like to play called ‘Hush Hush’, an old Scot’s song. I took off my capo and started to play the lullaby while the young child stood listening, eyes wide open. Afterwards she made a gesture that her Mum said meant ‘more’.

So I sang the song a few more times. Afterwards, the wee girl picked up the capo and handed it to me, her little hands so small and cold. It was a sweet moment, made the more sweet after discovering Vinny took this photo.

2 thoughts on “Eyes of a Child”