Fingerstyle – Four Artists Under one Roof

This was to be an evening of Fingerstyle guitarists weaving their melodies and compositions around our minds and hearts. However, I arrived ‘late to the party’. After a one-hour 45-minute drive to Hamden’s The Outer Space, I paid at the door and walked in to hear the dulcet tones of Anthony Troy and an audience applauding.

Anthony thanked the crowd and, to finish, would play a piece entitled “Aerial Boundaries” by Michael Hedges. I was disappointed only to catch one full performance by Troy but far from disappointed with his technique and mastery of the guitar. Troy’s left fingers would dance jaggedly on the guitar neck while his right hand would slap the bass strings, almost like another voice: different yet belonging. Closing your eyes, you felt you were being taken on a musical journey in which time stood still.  I awoke to silence, then rapturous applause.

With a gracious bow from Troy, the next artist came up on stage.

“The closest thing we have to Michael Hedges in the 21st century,” said Blake Goodwin, internationally acclaimed acoustic guitarist of Connecticut-based composer/acoustic guitarist Dana Merritt.  Merritt has a completely different presence both as a fingerstyle guitarist and as a performer. One might also add, as an author of gestures. She likes to tell a story before each song, which helps frame the piece we are about to hear and helps us listen and appreciate on a different level.

Merritt released her 2016 album “Get Yourself Together”, however, tonight we heard several compositions not on the album, which means you really want to catch Merritt whenever she is playing. Her next album will be released late winter/early spring 2018.

Throughout her 30-minute show Merritt performed songs woven together by the artist, yet each singular and beautiful. The swaying movement of the pieces was in synchronicity with the physical gestures when playing her instrument. It was as if Merritt were slow-dancing with her guitar, weaving her fingers around the neck and body in gentle swells that would leave the instrument, only to return once again. Most beguiling.

Things Change was written as an expression of the composer watching winter change into spring. Gentle, tender and peaceful, there is a positive undertone suggesting the eventual welcome of a new season approaching. The tempo of the song reflects the pace of seasons changing: we stay in the warm, out from the cold while nature hunkers down for the winter and slows its body clock. Four minutes into the song and a change in structure suggests spring is arriving, with all its beauty and life.

Get Bent was the last song in Merritt’s performance. The guitar becomes percussive, a gentle beat on the body carried throughout the song like a carrying stream. When the beat does stop at certain points, Merritt unfolds the melody and we find ourselves mesmerized with its ebbs and flows. Here we see a real evidence of the artist talking to her instrument, while both unveil the story. Merritt’s right thumb and palm would loosely slap the body, then rise and drift away. Her right hand would snap the strings in harmonic reverie, then take flight. These gestures continued throughout the song, like a moving sonic stream utterly in harmony, the audience drinking its waters. Becoming replenished.

There is then a sense that the last bars of the song are approaching. However, what you see is a profound ending. As the last notes rise into the air, Merritt’s arms gently come forth, unite and fold around the guitar with tenderness. It is a deeply moving act.

Merritt hopes her ‘guitar playing makes you feel something”. It did tonight. Check out Dana’s website or Facebook Page. You can also find her on Instagram.

Cullen Gray then came to the stage and proceeded to set up some serious foot pedals. We were in for some serious sound.

Cullen not only shapes his guitar into willing submission, he brings a whole orchestra to share in the spectacle. This artist has the ability to create an almost symphonic sound. His performance on the small Outer Space stage was akin to watching a 3D-movie just a few feet away from you, consuming every sense you possess.

I use movies as a reference because Gray’s arrangements on certain songs feel like cinematic compositions. He uses delay/reverb (Boss ME-80) and a loop pedal (Digitech JamMan), all woven to varying degrees. Through the use of expression volume swells, he produces wonderfully ethereal sounds on his guitar that give the instrument a diverse guise of characters ranging from a piercingly haunting violin sound to that of a thicker orchestral pad/string. Gray is a true composer and a masterful fingerstyle player with a suite of songs that were psychedelic, ambient and wonderfully hypnotic.

Elysian Field, Gray explains – just before he begins to play – is one of the oldest songs he plays live, was written in High School but is available on his latest CD “Duende”. This was going to be a delight: I for one have never seen two capos on a guitar.

He adjusted his echo pedal and proceeds. Immediately there was a slapping energy to his strumming right hand, swathed with layers of delay that kick back. Gray then slapped his thumb on the guitar body, the sound of which resonated like a deep, penetrating murmur. The guitarist’s left hand proceeded to take lead, as we heard notes rise and descend with an alarming energy.

Two minutes into the song saw Gray returning to the slapping section we heard earlier. He looped the sound, then added an effect that produced a pad-like sound from his guitar. Also looped, Gray then layered in lead guitar. Yet another two guitar pieces were added, each with respective subtleties that knew their small yet welcome place in the composition. You could tell the song was rising, you were caught in its swell. “It must fall away soon”. But when.

Gray, now halfway through the song, stepped on his Boss ME-80 Multi Effects unit and the layered sounds we’d just heard, their swell now fading away to leave the guitarist to exhibit more of his intricate guitar playing and what could be deemed as a third act.

This act was stripped down to pure fingerstyle playing that showed Gray’s signature style dominating. A wonderful use of harmonics and lightness yet with a rhythmic pulse that wanted us hearing more. And more was delivered, as Gray hit four (harmonic) notes – B G# F# C# – and a right-hand strum that marked the end of this section and returned us to the vibrant layered section we’d heard previously.

Gray then produced a wonderful solo before placing his left hand on the neck to hit individual strings fast and in succession, while his right-hand would lean over onto the neck – as if to complement – through the use of a slapping of bass string notes.

We never had a moment to become complacent, for Gray then began to pound the bass strings, in between slapping the guitar body, almost flamenco in style. The fingerstyle guitarist continued unabating until he stopped, and let the residual notes carry out the song.

It was a wonderful display of diversity in one composition written by his younger self that highlighted the musical prowess garnered in high school that Gray could but nurture. And nurture he did.

Glenn Roth is well-known on the Connecticut stage but has also traveled nationally and internationally performing his singular fingerstyle of playing that traverses original songs as well as tailored arrangements of pop classics, classical, jazz, holiday music, standards.

A strong supporter of live music, he has never forgotten his roots and continues to play in small venues in and around Connecticut when schedules permit. Tonight was one such occasion. Roth delivered some wonderful performances of his original songs.

Roth’s original compositions were so diverse in style yet threaded together by the same great musicianship. On some songs, his fingers were gently picking the strings while on others he was beating them into a frenzy.  His thumb would often ride the melodies and, were you not to look at Glenn, it’s hard to believe there wasn’t more than one instrument playing. I caught “Ghosttrain” on camera.

Roth would take the room by storm with an opening lead that would suggest you’re in for a journey. Sure enough, 20 seconds into the song and we’re fully immersed in the rhythmic delights and some of the fastest finger-picking I have ever seen. We were now in what I call the third act and we hadn’t even reached one minute into the song. It was a cornucopia of sound delights, fast-paced yet spacious in other parts. “Ghosttrain” is an apt title: close your eyes and you felt the vibrations of a train steaming across the open heartland, yet the song’s more sparse sonic moments suggested a ghostliness. Compelling twists bends and turns to a piece that was quite extraordinary.

Roth ended his show and the evening’s fingerstyle concert with a blistering arrangement of Aerosmith’s Dream On. Here is the official recording on Spotify.

Four corners of the fingerstyle world in one small ‘outer space’. An amazing Outer Space.

Now, THAT is a journey.

Below is a playlist video of all four performances. 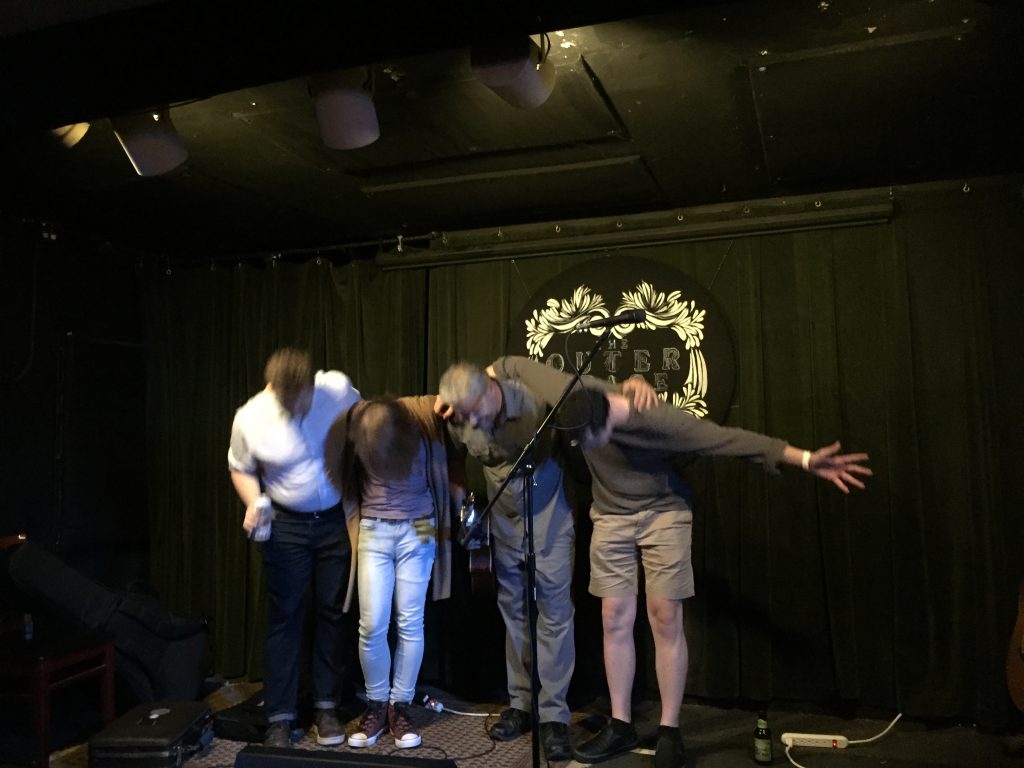