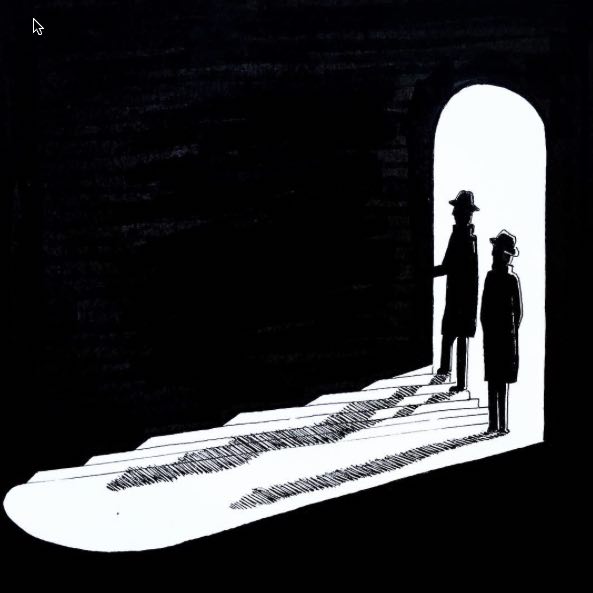 For as long as I’ve enjoyed art, I have primarily been drawn to painting, especially works that have strong brush strokes, or where the paint is layered on thickly, rising above the surface of the canvas almost in waves.

Seven days ago I discovered a sketch artist. An image of his had caught my eye. Its background was entirely black. On the far right-hand side was an archway in which one saw the silhouette of two people, both with their shadow projecting onto the ground. In my own photography work I have a penchant for bold lines, strong use of black and white, and heavy contrast. Perhaps this was the attraction.

The caption read ‘… but by the time they rang the doorbell it was early morning‘. This doorway image really resonated with me.

The artist’s Instagram name is Itsinlayers. If you look at his gallery you’re immediately struck by a select range of background colors: white, sepia tones, or bold-as-black black. Within these backgrounds one finds an alluring variety of styles and techniques. It really is a hit on the senses.

The approach Itsinlayers uses for a particular idea seems just right for that image. For example, the strong use of ink in some images makes a bold statement, examples such as ‘sometimes it felt like I was three’ or ‘why not move onto the blank page?’

Then there are other drawings where he uses what appears to be downstrokes-only. This approach brings a lightness of tone to the page, complemented by a sense of air and of space between the strokes that supports the energy of the image, rather than diminishes it. There are two fantastic portrait sketches to illustrate this: ‘the guy at the mall‘ and ‘but no one told him he was supposed to be there’.

There is yet another layer of this artist’s work to consider. Certain images are comic like, almost gently playful while others are tender and thought provoking. There really is a lot to discover with this artist and much to enjoy. His name is apt: Itsinlayers.

Don’t take my word for it, check out Itsinlayers on Instagram as well as a wonderful interview on the PrjctOMNI site.

I mentioned earlier that one of Itsinlayers images resonated with me, an image showing a doorway. On the same day I discovered his work, a new song came to me, entitled NOW. I knew both the concept of the song and the feeling that the melody was to convey. While I was creating the song structure and finding the lyrics, Itsinlayers doorway sketch kept playing in my minds eye. Indeed, this image and one other regarding a blank page, helped me to complete the song. It wasn’t only Itsinlayers subjects, it was his chosen artistic style for these images which had an impact on the tone and artistic style of the musical arrangements.

The layers of the song built steadily. Twelve hours later, the song was complete and ready for the recording studio. Project ‘NOW’ is the fastest song we’ve worked on, from its inception to production. And still it will evolve. Check out the ‘Here and Now’ story to learn more about the song, hear a sneak preview of the demo I took to the recording studio and see Jose Feliciano drummer Tyger MacNeal lay down his magic.