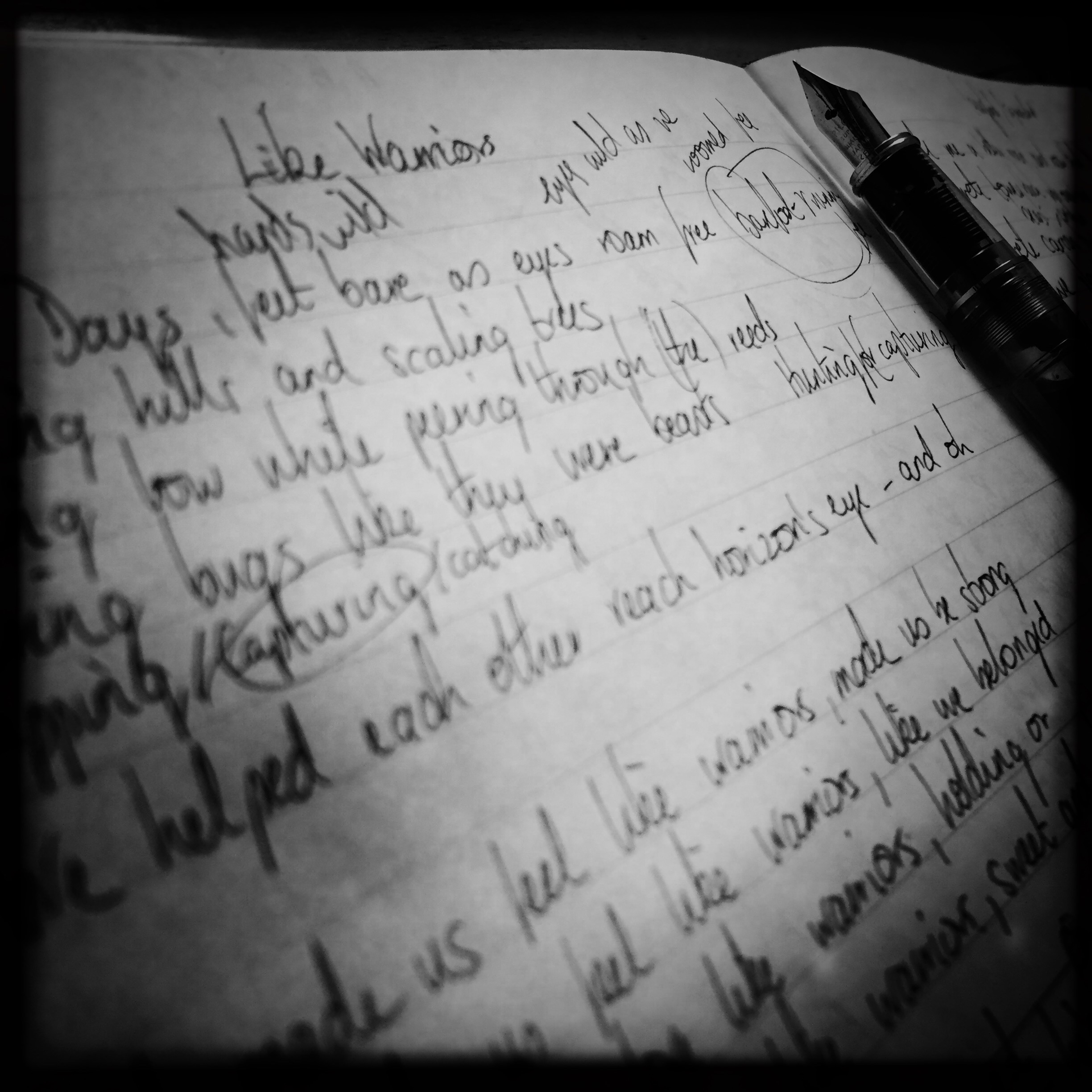 For those interested in the creative process, I thought I’d take a little time to talk about it in the context of the new single Like Warriors. If you want to hear instead of read, click on the file below.

Like Warriors made it to the virtual music store shelves in December. That was always a given, but the whole idea of creating a music video was never on the cards. I am sitting here tonight while the music video posted on Facebook is close to reaching 4000 views. That just goes to show the power of community: people rallying around, sharing stories, reminding each other of what it was like to grow up in Oxgangs and surrounding areas in the 60s and 70s.

It’s hard to believe I only started writing the song in September. I found an entry on my Instagram with a photo of my writing book and the song’s lyrics. It was Labor Day weekend. I was sitting on my balcony; the summer sun was most definitely retiring but was still warm enough for sitting outdoors. Although I only have a small balcony, it feels a big space when I get into the guitar. All those city noises fall away and my head moves into my favourite place.

For some reason that evening I’d been thinking about Oxgangs, the hills and especially the burn behind the high-rise flats. As thoughts wandered, my hands drifted over the guitar neck, and my fingers began to pick simple notes.

Then something clicked: heart and hands came together as did the essence of the song. Like Warriors was a sweet example of this creative combustion. The most satisfying songs are the ones that reveal themselves pretty quickly. So, one more week spent refining the words and the song was ready for the home studio.

Once the main vocal and guitar parts were recorded, I was able to explore the other voices that had been continually playing in my head. It’s always key to just get them down and decide later whether they become instrument parts or they remain vocal parts. After that, the next few weeks were so sweet: me, the guitar, being at home and discovering the song.

It didn’t quite feel quite Springsteen’s Nebraska, but it was definitely organic and real. Nothing contrived. Then it was time for the main studio in downtown Stamford.

Aside from swapping out all the parts for newer, spangly and well recorded ones, I really wanted to capture those spontaneous guitar pieces I’d done at home. Whilst it is hard to re-create something spontaneous, I did rehearse a lot to the original Zoom H4N recordings.

On the fourth and final visit to the recording studio, the first thing we did was to tighten the ‘shadow’ backing vocals. They’re the ones you hear towards the end of the song that sound like an anthem, like a chant (they actually reminded me of footie matches!).

Finally, we laid down the dusting of guitar parts. I sat in the vocal room, stuck on the headphones and took direction from Steve through an intercom. He set up the cues to various sections of the song. One by one, I played through the sections where the guitar has a heavy delay effect and then I played the two special parts you hear at the very end of the song. One is them is almost like a whisper and is the last sound you hear.

With this whisper it was fitting to finish the song in the recording studio the way I had started it all those months earlier on my balcony: with simple notes. And a dream achieved of creating something that would remind me of how I feel when I think about home, about Oxgangs and about an amazing Edinburgh childhood.