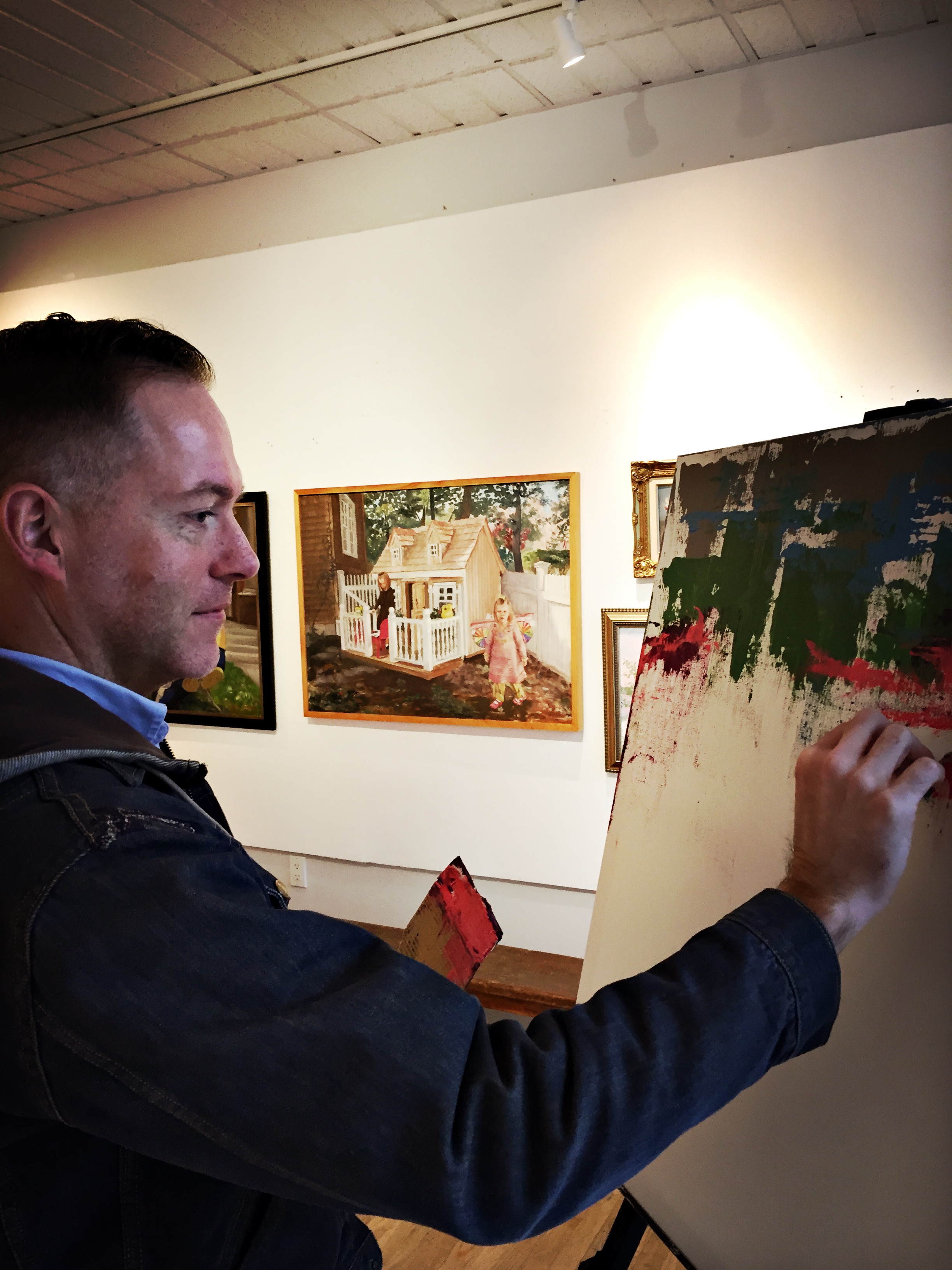 I went to see an exhibition at Stamford Connecticut’s ’96 Bedford Gallery’. My good friend Joseph Dermody was displaying his work alongside those by Jeanine Jackson.

A week earlier I had bumped into Joe while heading to a newly opened coffee shop newly opened. Passing by the former Fernando Alvarez Gallery, I spotted Joe painting inside. I beamed: I’d only just returned from Scotland a few days earlier and had been disappointed to miss an exhibition called ‘Artspace’. Thankfully, I’d gotten the dates wrong and the exhibition was still running.

Joe gave me a warm hug and invited me in. He showed me around the gallery and explained that not only was he sharing the space with Jeanine Jackson until the end of November but this was part of a series of pop-up events organised by Jacqueline Wetenhall of Stamford Downtown.

It was an inviting space, full of light, clean symmetrical lines and wonderful paintings from both artists. It just had a great vibe. Joe and I started talking about being creative in the same space. All I knew was that I wanted to write and play in a space that was steeped in art. We agreed a time to get together at the gallery and just see what would happen.

So, today was the day. I’d had a lot of projects going on these last few weeks and today was just perfect: plenty sleep, no more weight on my shoulders and, finally finding the time to pick up my guitar, sorely missed of late. I must admit to already feeling energised: I’d played at Southport’s Horseshoe Cafe the previous night, singing to old friends and new listeners that made me very happy.

I met Joe at Llorca’s for coffee and churros before we headed to the gallery. While Joe munched on these freshly made Spanish delicacies, I played a song entitled Call Me By My Name. It was a gentle way to start our afternoon. We talked about song structure (Joe is classically trained, unlike me) and it was fun my comparing a song’s structure to going to the theatre. The song, I said, was akin to you arriving at the theatre; the verse was similar to walking down the aisle of the auditorium to take your seat. I then went on to say the pre-chorus was as if the actors, appearing in the wings, were slowly taking the small steps leading onto the stage. As they step onto the stage one by one, you know you’re about to witness something special. And THAT something special is the chorus, the moment the actors utter the first words.

Joe asked, “So what is the bridge ?”. I said I likened the bridge (or a middle eight in the UK) to an intermission in a play, the aim of which is to help change direction, to give the listener a pause, a time to reflect, have a break and look forward to the next part of the play.

It was fun talking about it and Joe made me think it through. “How many verses are there typically, and what are they trying to say?” he asked. Good question, I thought. I replied that it varied but I’d say that, given we’re using the theatre as a parallel, the verses represent different acts.

I was chuffed with my analogy. It made me smile: I liken song structure to the theatre and song composition to creating sonic landscapes. Quite the imagination :).

We all chatted some more, I sang a few more songs including Call Me By My Name while Joe painted. I finished the afternoon with a rendition of a traditional Scottish song The Wild Mountain Thyme, the lyrics and melody of which are a variant of the song “The Braes of Balquhither” by Scottish poet Robert Tannahill (1774–1810) and Scottish composer Robert Archibald Smith (1780–1829).

What a fantastic space for a pop-up art gallery. The exhibition is on until 26th November and we’re back together again Friday 15 November 3-6p.m. if you can make it to @96BedfordGallery. Click on the Google Map link https://goo.gl/maps/G8mgGktthUWs1F5B6