River Running is taken from the EP ‘2+2=4’. Beautifully shot in Upstate New York the music video visually aligns itself with the song’s storyline. The song compares a child becoming a man to a stream becoming a river. And how we must try to stay true to our course.

This music video for River Running is a real highlight for me. I love the outdoors and often think nature weaves its own tapestry, has its own texture if we just look hard enough. It didn’t take too long before Vinny and I were meandering as much as the river we were filming. I knew what I wanted to try to convey with the video. But, I also knew that ideas would come to me on the day of the shoot, despite having created a storyboard.

As a photographer, I’m also a fan of black and white – I produce metal prints – and felt the footage would look better in monochrome. On that day the sun was strong but low in the morning sky. This meant shadows, which meant many high-contrasting shots. The image you see below highlights just how much contrast played a part in the video and how the most simple of elements in the outdoors can look special when it gets a chance to take center stage.

These are just some of the background to River Running. The official video is released on 22 January, here on kathymuir.com.

Until then, if you’d like to hear River Running as well as the other three songs on EP 2+2=4, then click on this link 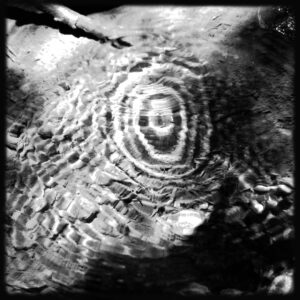 One of four shots taken during the filming of River Running